“Get to know your board members” series: Franco Uda

In this “Get to know your board members” series, we have interviewed the IFS board member and Secretary-General of ARCI, Franco Uda from Sardinia, Italy. 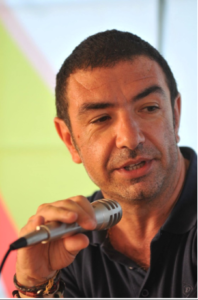 Where do you work and what is your title?

I have been working in ARCI for over 20 years, first in my region and now both nationally and locally. Now I am the Secretary-General of ARCI in Sardinia, engaged in coordinating the overall activities of our community-based associations and in organizing youth projects that deal with memory and Civil Service. At the national level, I am a member of the ARCI National Board, in charge of human rights, peace, volunteering and international solidarity. Since 2016 I have also been working in ARCS – the NGO of ARCI – as Vice President, involved in projects and training for young people who deal with peace and global issues. I currently represent ARCI in the EuroMed Rights Executive Committee, in the Board of Directors of the European Civic Forum, in the Solidar International Cooperation Forum.

I studied mathematics at the University of Pisa and there I carried out the Civil Service at the reception center for migrants of the Municipality. Back in Sardinia, I was elected regional president of ARCI. In those years I participated in the editions of the European Social Forum in London, Florence, Athens and the World Social Forum in Brazil and Tunisia. I was subsequently involved in prison conditions as a national officer of ARCI for prisons and prisoners’ rights and I was Vice President of the National Conference of Justice Volunteers. Later I dealt with youth policies and I participated in the coordination of European networks for youth mobility and international exchanges; since 2014 I have represented ARCI in the coordination of the Italian networks on the issues of human rights defenders, peace and disarmament. On behalf of ARCI and ARCS I have carried out several missions abroad: Palestine, Sarajevo, Casablanca, Tunis, Vilnius, Western Sahara, Cuba, Washington DC, Amman.

Describe what you do for ARCS Culture Solidali.

As a member of the ARCS Board of Directors, we are responsible for the political direction of the NGO. In particular, I follow the projects intended for the younger generations: those of the EU programs of youth cultural exchange, coordination and training of the Civil Service and the Peace Civil Corps, as well as those concerning global education training.

What are your hopes for the future of the IFS and the Settlement Movement in general?

I have a lot of good expectations for this new position in IFS. First of all, because in the work of all these years we have always focused a lot on community work, both in terms of national impact and in that of international cooperation. There is also a great need to network good experiences and exchange best practices between different CSOs globally. Last but not least, I believe that the issue of social justice is today among those that can make a difference in the global inequalities that often generate conflicts. I, therefore, consider IFS as my “natural home” in the continuation of my commitment.